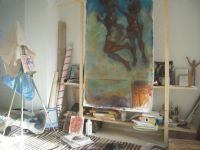 Daphne Petrohilos was born in London in the 1960s to Greek East African parents and was raised between Tanzania, Greece and London until the family moved to the US where she finished her degree. With a BA in fine art from the Art Institute of Chicago, she returned to Europe in 1992 to paint and work on her ancestral soil, a remote Greek island off the southern tip of the Peloponese. In 1999 she resettled in Dublin after a two week stay at the Cill Rialaig artists retreat and continued work on what has become an almost 30 year fascination with island life and culture. As a figurative painter from a largely academic background, Daphne draws on the nature of classic and unchanging human themes to form the underlying narrative to her pictures.

Her work has been exhibited, collected, and published internationally from the tiny local news papers and cafes of Island villages to the Greek national press, and the RHA, The Bridge Gallery, and The Solomon Gallery of Dublin. She currently divides her time between Ireland and Greece where she is part of a collective to organise and offer workshops in arts and traditional crafts of the area.