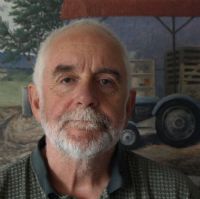 Born in Dublin in 1949, studied at the National College of Art and Design in Dublin for three years up to 1970.

Set up an etching studio in County Meath in 1976.

Moved to Switzerland in 1979 and worked at the Centre Genevois de la Gravure for two months, then three months working at the Atelier of master printer Raymond Mayer in Lausanne.

Anima Graphics in London published work produced in Switzerland in 1980.


Joined The Graphic Studio in Dublin and continued to produce work which was published by Anima Graphics, spending some time working with their printers in London. Secretary of the Graphic Studio for one year.

Worked in AGB Graphics in Madison, Wisconsin for eighteen months over the next few years, continuing to work at the Graphic Studio when in Dublin.

Anima Graphics changed to London Contemporary Art and continued publishing the etchings until the mid 90’s.

Moved to Hollymount, Co. Mayo in 1986 and established a studio with the assistance of the IDA.