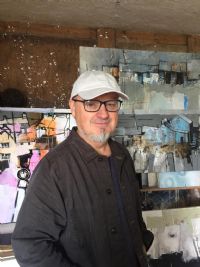 Pete Monaghan is a 2G Irish contemporary artist working in Aberystwyth, Wales and in southern Germany.

He is inspired by vernacular architecture of the Celtic Fringes and likes to tap into the special energy of place.

From initial sketches in the open, he refines and reworks images in the studio, creating work which is full of energy and tension. It celebrates the beauty and dignity of humble buildings.

Pete enjoys collaging everyday objects into his paintings, there are often pieces of coffee cups, maps and corrugated cardboard to be discovered. Portions of each painting are retained as drawn elements to reflect the fragility and temporality of the structures. Pete's work is part representation, part visceral interpretation.

After initial training in mechanical engineering he retrained in illustration and subsequently spent twenty years working as a technical and architectural illustrator. For over fifteen years now he has been

seeking to integrate the strict illustration disciplines with an irrepressible passion for drawing and painting. In 2012 he completed an MA in Fine Art at Aberystwyth University.

Present works call on the depth of drawing expertise to depict vernacular architecture. He is especially interested in the "wabi-sabi" effect; the beauty in the hidden, the modest, the decaying or the plain unnoticed. Sketching on location is an important part of capturing the experience of place. I often re-draw in the studio in order to interpret and understand. Paintings may begin with drawing or sometimes, more playfully, with colours or shapes, enticing a dialogue of part visceral response, part representation. Finished works conclude as mixed media pieces incorporating acrylic, ink, crayon and collage. My innovative 2014 Arts Wales funded project entitled “demise of the rural welsh filling station” was seen as a timely and important comment on Welsh social history. In 2012 I was selected as one of ten commissioned artists to produce artwork for a poster in the “discover the valleys” project run by Celfwaith and Groundwork Wales. Pete works from studios in southern Germany and Aberystwyth, west Wales.

This text is copyright Peter Wakelin, 2017, who licenses Pete Monaghan in perpetuity to use and publish it or extracts from it world-wide provided only that a) it is not altered without agreement and b) Peter Wakelin is acknowledged as its author.

Neglected and dilapidated places fascinate Pete Monaghan. He has returned to them over and over again until they have become firmly established as the subject matter of his paintings. What is it that draws some of us to the tumbledown, to the make-do, to ramshackle farms and rusting echoes of abandoned barns? These are tatty, unaesthetic places. Many people turn their gaze away from them but, for those with eyes to see them, their forms are beautiful and their stories are compelling. Every detail reflects some labour, the solution to some problem: each boulder in the dry-stone walls was once lifted into place by hand, each patch made in corrugated-iron roofs is the ghost of someone’s ladder-reach. These places all were once the centre of someone’s life.

Poets and artists have long been drawn to ruins. In the eighteenth century the Reverend William Gilpin, pioneer of the Picturesque, even suggested knocking a bit more masonry off Tintern Abbey’s gables better to please his eye. But Pete Monaghan isn’t seeking either picturesqueness or the decaying splendour of palaces and monuments humbled by time. His is a more organic appreciation, a ground-up view of the struggles we all face to make a life, keep out chaos and hold back the natural forces of change.

His early background in technical illustration could not be more different from his approach to these works. He began to refocus on painting from around 2000 and then in 2010 took a career-defining plunge with an MA in Fine Art at Aberystwyth University School of Art, and found it immensely liberating. All his skill for the accurate, hard-edged depiction of mechanisms and glossy objects, from valves and gears to bullet-trains, had to be thrown aside, unlearned, in order to tackle this more haphazard world. By contrast with the airbrush and computer graphics of his illustration work he now works with roughened surfaces, dribbled and spattered paint, the imprints of found objects and elements of collage, including maps that speak of nature and geography and corrugated cardboard that quotes the rhythms of tin roofs. The distressed qualities of serendipity in his paintings harmonise with the buildings he records.

He finds his subjects particularly in the wild, weather-beaten west of the British Isles and spends his painting time in the less-kempt hills and coasts of the Celtic fringes and keeps a studio in the full brunt of the gales off the Irish Sea, high up in the magnificent Old College building on the front at Aberystwyth. Perhaps because of his Irish roots and childhood holidays in Wales, he feels completely at home.

The man-made structures that engage him reach beyond the farmsteads and outbuildings that he loves. His paintings of petrol filling stations and garages, done for his final exhibition at art college, have a grand vigour to them. I suspect he could never bring himself to paint a shiny Shell or Texaco garage, but his tiny, struggling, rural filling stations seem to be layered with life stories, conversations, journeys and destinations, embodied in objects like the ancient petrol-pumps or a two-car canopy that which must have been just the thing in say 1965. He has been making bold paintings of boats too – not sleek, white yachts but working vessels, strong in shape and colour, oil stained and functionally trussed with ropes, aerials, fenders and nets. All these subjects share the down-to-earth honesty Pete Monaghan strives for in his art.