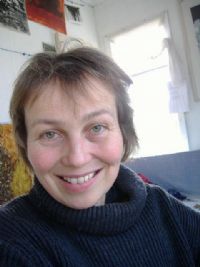 Renate Debrun was born and grew up on a farm in a small village in rural northern Bavaria. She left Germany in 1977 for Ireland, then lived in the US, Mexico, Spain and England, before returning to settle in Dublin in 1989. She now divides her time between Ireland and France.

As an artist she is self-taught, taking up painting professionally in the mid-1990s. Initially she worked on fabric, then concentrated on print-making, and currently works in both printmaking (etching and monotype) and mixed media drawing. She has exhibited regularly and her work is represented in corporate and private collections in Ireland and abroad.

She originally studied languages, finishing with an MA in English/Romance Literature and Linguistics, and she speaks English, German, French, Spanish, and Greek.
Renate’s other main area of interest is in plants and landscaping, and for the past 15 years she has also been working part-time as a professional plantswoman and gardener.

..In working you are really following this kind of cloud of sensation in yourself, but you don’t know what it really is. And it’s called instinct. And one’s instinct, whether right or wrong, fixes on certain things that have happened in the activity of applying the paint to the canvas… Francis Bacon

2008 was when I began to follow my own ‘cloud of sensation’. Slightly bored with print-making, and increasingly disaffected from painting, I decided to allow myself some time to experiment with the simple and fluid media of acrylic inks and charcoal, without regard to colour, brushwork, texture or composition, in order to give my imagination the freest possible rein. Being self-taught in the first place, rather than being perceived as a disadvantage, was for once to be a bonus.

What started as an exercise in loosening up surprisingly quickly took on a life of its own, as various tribes of animals and other creatures started inhabiting my work. They originate in random patterns generated by wax and ink, generously and vigourously applied to paper. Then looking, dreaming, and looking again, until an image, a feeling, or a word – I often do not know which is first – emerges. From then on the image, the title and myself are locked into a sometimes happy, more often fractious, menage a trois. Often working under the baleful or mocking stare of one of my creations, I add, scrape away, illustrate here, erase there, accentuate a line here, turn a shape into an eye or a paw there….and frequently the unfortunate creature ends up in shreds in the bin..

This role of accident and chance in drawing out images from the subconscious has been a central thread in my work. It was there in the early paintings on silk, reappeared in printmaking when I turned to the semi-abstract landscapes of my monotypes, and now forms the basis of the current work. As one always circles and ultimately returns to one’s fundamental themes and obsessions, I have come back to and accepted to work within the limitations of chance.

Languages have been another central thread in my life, a passion I have retained since my early training as a linguist. The titles I have given these drawings are important and form an integral part of the process of generating the work. As an image is born out of the random patterns, it claims its name; the name then becomes part of its genesis; later, if its mood shifts, it may call for another title. Language draws out shapes from the visually inchoate and feeds new meaning back into it. In these pieces language/thought and the physical shape evolve in tandem, one nudging on the other. Impossible at times to say which was first, the word or the shape.

This work draws much of its atmosphere from my rural Bavarian childhood with its superstitions and tales of temperamental and mischievous spirits, and the many flitting, half-seen, half-imagined creatures with which a child’s imagination peoples the forests and dark barns. Mercurial and never entirely benevolent or malevolent, those perhaps inspired the mood of ambivalence in many of these pieces: who is threatening and who the threatened, who the tamer or the tamed, the master or the underdog? There is shape-shifting and ambiguity, making gentle, innocuous rabbits and birds sinister and aggressive, while rats and devils become timid or dreamy. There is religion in various irreverent guises, and there are many dancers and musicians. Many of these ‘animals’ are half-human or showing human traits, thus fusing human awareness and emotions with an animal body and animal spirits.

Lastly, this imagery is also remarkably evocative of the Native American “trickster” tradition referred to in the title of this volume, with its wily animal protagonists. After being made aware of this, I visited the USA to take up a residency at the Virginia Centre for Creative Arts in 2009. While there, reading those trickster tales and exploring a landscape full of unfamiliar sounds, smells, light, and a wonderfully strange fauna, provided the kind of magical environment that helped produce much of the motley universe in this volume. Renate Debrun